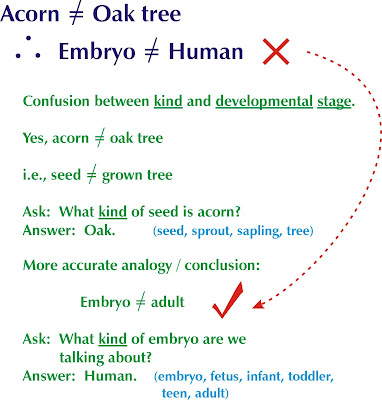 Acorns and oak trees…and abortion
Because abortionist Dr. Henry Morgentaler has been awarded the Order of Canada, and because I (and many other Canadians) think that in this case the award is a huge mistake, I wish to dismantle another abortion argument, to help show why the award is a mistake.

An oft-heard argument in favor of abortion is the acorn-oak-tree analogy: An acorn isn’t an oak tree, so the fetus isn’t a human being, so abortion is no big deal.

Should we be persuaded by this argument? Answer: No.

To compare an acorn to a fetus and an oak tree to a human being and then conclude that a fetus is not a human being is to draw a false conclusion from a faulty analogy.

The unstated premise consists of the following comparison: acorns are to oak trees as fetuses are to human beings. But this is problematic.

In other words, the acorn-oak tree analogy confuses the concepts of kind and developmental stage. Yes, an acorn isn’t an oak tree, that is, a seed isn’t a grown tree. But we need to ask: What kind of seed is the acorn? Answer: Oak.

Now consider the fetus. What kind of fetus are we talking about? Answer: Human.

The fetus is an early developmental stage of the human. The first stage is the zygote (fertilized egg) and subsequent stages include the embryo, fetus, infant, toddler, teen, and adult. Significantly, all the stages are human—i.e., human entities, human beings.

An acorn isn’t an oak tree, so the fetus isn’t a human being, so abortion is no big deal? The logic of this argument is just plain nutty. (Sorry, I couldn’t resist the attempt at humor.)

Is it a mistake to call a fetus a human being? No. What is a mistake is to think that only adults are human beings, which is what the faulty acorn-oak-tree analogy would lead us to believe.