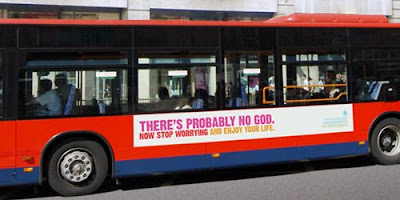 Advertisements on the sides of buses in Calgary, Toronto, and elsewhere read as follows: THERE’S PROBABLY NO GOD. NOW STOP WORRYING AND ENJOY YOUR LIFE. Although I respect my atheist neighbours and friends, and although I will defend their right freely to express their worldview positions without fear of persecution—as I hope they would do for me—I nevertheless disagree with their position (their position about God, that is; not the bits about worry and enjoyment).

I think the evidence favours God’s existence. In defence of my position, here is a sketch of a cumulative case argument from science, ethics, and history (to be further defended in subsequent Apologia columns).

First, a clarification is in order. A cumulative case argument consists of a collection of sub-arguments that, individually, may not provide strong or decisive support for a conclusion, but jointly do—just as one strand of string may not be strong enough to lift a heavy load but several interwoven strands are.

The big bang posits a beginning of the universe. This, together with the principle that whatever begins to exist has a cause, strongly suggests that the universe has a cause. Moreover, this cause, because it is the cause of all matter/energy, space, and time, would be physically transcendent (i.e., immaterial), temporally transcendent (i.e., eternal), and very powerful (perhaps all powerful).

In addition, the exquisite fine-tuning of the universe’s conditions for life suggests that the aforementioned cause is highly intelligent. Also, life’s blueprint—DNA’s code/language—smacks of an intelligent cause.

Furthermore, the fact that the universe operates according to mathematical/rational principles and the fact that our minds can understand many of these deep principles (a feat immensely beyond what is needed for mere survival)—these facts make good sense on the view that a rational Mind created both the universe and us.

2. Our experience of morality points toward God.

That all people have real worth (and so shouldn’t be murdered, tortured, or otherwise abused) is well explained by the doctrine that people are made in God’s image.

Also, the fact that we have free will to make moral (or immoral) choices makes sense on the hypothesis that God gave us the mental capacity/freedom to choose (or reject) the good.

Shortly after Jesus’ death, various individuals and groups of individuals claim to have seen, touched, and conversed with the resurrected Jesus in various locations over several weeks. Also, the lives of these individuals were transformed into an irrepressible witness to Jesus’ bodily resurrection.

Because of what we know about dead bodies, a resurrection, if it happened, would be best explained as supernaturally caused. This means (especially in view of the previous evidence suggesting God’s existence) that Jesus’ actual resurrection shouldn’t be ruled out prior to historical investigation. The result: Jesus’ miraculous—i.e. God-caused—resurrection is strongly suggested by, plus makes good sense of, the historical evidence.

Who designed the designer? (Part 2)